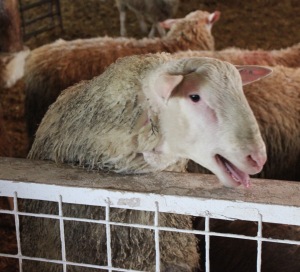 In 1994, WoolDrift imported Canada’s first purebred East Friesian embryos, and we have been working on the genetic improvement of our flock every since, considering milk weight, components and lactation length. The WoolDrift farm flock has been closed since 1993 with new genetics being added through artificial insemination (AI) or embryo transfer (ET) only.

Our sheep graze freely in pasture during the summer, and aren’t milked during the winter months. Intensive rotational grazing, with only limited amounts of grain in the milking parlour, helps to maximize milk production off grass. The abundance of fresh grass means the flock’s milk contains a high level of conjugated linoleic acids, chemical compounds found in milk that have been studied for their anti-carcinogenic and body-weight management properties.

The health of our flock is extremely important, and WoolDrift has taken part in the Ontario Sheep Health Flock Program, developed by University of Guelph researchers at the Ontario Veterinary College; the Maedi Visna health program; and the Voluntary Scrapie Flock Certification Program.

We started our Maedi/Visna (OPP) eradication program in 1989 with an annual test and cull routine. The entire flock has been testing negative since 1992. In 2001 we enrolled in the Ontario Maedi/Visna Flock Status Pilot Project and reached “A” status after our annual test in April of 2004. The flock was also enrolled in the Ontario Sheep Health Program where we continuously monitor for other communicable diseases and strive to improve management and bio-security; we have not diagnosed foot rot, orf (sore mouth) or Johne’s in our animals. Since its inception in 2005 we have also been enrolled in the National Scrapie Flock Certification Program and received level “C” on Pathway 1 this year (2007)

Once a month, we send milk samples from each animal to Dairy Herd Improvement program for a computer analysis of fat/protein ratios and somatic cell counts – a prime indicator of milk quality. This allows for further attention to health and strategic breeding.

WoolDrift is one of only eight Canadian breeders of purebred East Friesian sheep – one of only three in Ontario. Registration with the CLRC establishes and records the genetic history of our flock. Visit our CLRC records here.

Discover the opportunities in dairy sheep